Final Report for "Lorena Stoves to Protect Lungs and Forests"

From the $1700, 152 stoves were built, in a variety of small rural communities in the valley of Jalapa. Thanks to an outpouring of support from local residents in the area, and additional volunteer contributions by American student groups, this project was able to build more stoves, in more communities, than originally planned.

Recently a group of students from Reed College in Oregon were here and I let them use the last of the funds for stove building, with great results for both interaction with Jalapenos and a lot more stoves getting built.

I can't think the donors and the Virtual Foundation enough for the funds for this stove project. Both projects I've been working on here (clean drinking water systems and Lorena woodburning stoves and chimneys) involve improving the health and quality of life for people in this country, which is consistently listed as the second poorest in the western hemisphere (behind Haiti). In addition, the stoves really do use much less wood than the standard type of wood-burning stoves here, an issue of great interest in addition because of the devastation caused to the pine forests here by a pine beetle infestation. People still tend to use wood that has NOT been attacked by the beetle, which is a real problem given that 90% of the pines here will eventually be killed by this beetle. What will be left over needs all the conservation it can get, and to some small degree the stoves help with that as well. 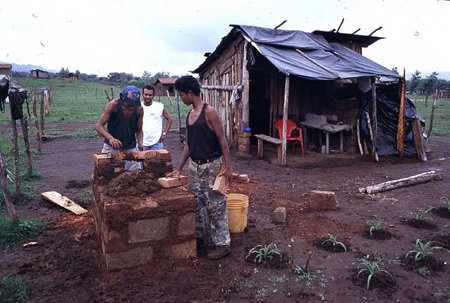 The Lorena stove project is based on two simple concepts: an enclosed stove burns less wood fuel, and a chimney built onto the stove carries wood smoke out of the house. Lorena stoves do both things.

Building the Stoves and Chimneys

Several people in the rural Jalapa valley have become experts in the construction of the stoves, and they use the family who is to receive the stove for help in building them. On the average, with the materials available, it takes between four to six hours to build one of these stoves.

One of the expert builders is Antonio Herrerra. He is 36 years old, has three children, and lives in the community of Champigny, most of whose residents are people made homeless directly or indirectly by 1998's Hurricane Mitch. Antonio is a gifted mason, but has had a hard time finding skilled work opportunities in Jalapa. He jumped on the chance to learn something new, and is now an expert on making Lorena stoves. Since he likes martial arts, he calls himself the Von Dom of Lorena stoves (after movie star Jean Claude Van Damm). Antonio is also on the water board for providing clean drinking water to the community, and has organized that project along with other community leaders in Champigny.

Another expert builder, Rosa Guitierrez, stands about five feet tall and is in her fifties. She can build a Lorena stove in about four hours flat, and knows how to hack the bricks with a machete so as to carve them without breaking them, a truly subtle skill. Dona Rosa loves kids; she takes care of two nieces and a nephew whose parents have left the Jalapa valley to find work elsewhere. 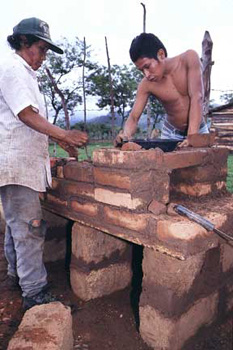 The chimneys end up being the most expensive part of the process, as they are usually made by buying broken irrigation tubes from local tobacco farms. One length of aluminum or iron tube can be cut up into three chimneys. The design is usually two potholes on top, the size determined by whatever pots the families have available. Adobe blocks are used as table legs, a plank as a table, and the bricks are carved by machete into the shape of the stove and the potholes. Most labor for building the chimneys comes from the families themselves. It shows how important these new stoves are to them, that some families build their stove and chimney first, then their house.

Although most stoves are being built by the Nicaraguans, this is also an excellent participatory project for visiting high school and college delegations from the United States. Several groups have taken part in building the Lorena stoves, literally getting their hands dirty while also learning about Nicaraguan culture and poverty first-hand. The chance for interaction between U.S. citizens and Nicaraguans in the context of building a stove is an intermittent but very important part of the whole project.

About the Stove Design We Use

There are several designs for these types of Lorena stoves, depending on the type of material available to make them. The name itself comes from the Spanish words "lodo" (mud) and "arena" (sand). In our valley of Jalapa in northern Nicaragua, however, sand is not actually part of the construction. Since bricks and adobe are available locally and cost very little, we use those as our building materials. The ground itself in most communities is so high in clay content that mixed with water it can be used as a cement. A little bit of actual cement - about a handful - is used to seal the cooking holes and the chimney. 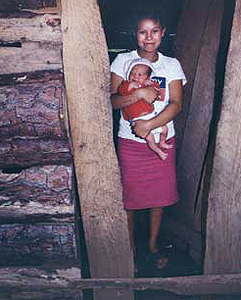 Benefits of Lorena Stoves
The benefits of the stoves are immeasurable in a place like Jalapa. Although heavily wooded, the region faces deforestation both because of logging and a pine beetle blight which threatens to kill over 80% of the trees in this region. Most importantly, the health benefits of a stove with a chimney greatly affect the lives of people in the poorest communities, especially children and mothers. Families are often indoors most of the day cooking, especially during the lengthy rainy season in Jalapa. The most common wood burning stoves that are used by poor families pour smoke throughout the house or shack, causing both short and long-term lung problems. Asthma is common, as is emphysema and other pulmonary problems, and for the elderly such inhalation of smoke aggravates any number of health problems, including heart conditions. The simple use of a chimney in building the Lorena stove helps to fight against these problems, since the smoke goes out the roof rather than swirling around the house.

This stove-building project is one small but very effective way to reduce the effects of poverty and deforestation in rural areas of Nicaragua, the second poorest country in the Western Hemisphere. Jalapa, an agricultural valley in the north of the country, is one of the poorest regions because of overall deteriorating economic conditions and the long-term effects of Hurricane Mitch in 1998.

In many of the poorest rural communities, unemployment is as high as 70%, which leads many men to leave for other parts of the country or even to other countries in search of work, leaving behind single mothers who need to care for the children. In the one community, Champigny, where most of the Lorena stoves have been built as part of this project, more than half the rudimentary homes of wood slats and plastic roofs are headed by single women, who often take care of older relatives as well. This same community is also more than 50% children aged twelve and younger.

Lorena stoves are not the answer to every problem facing rural Nicaraguans. Lack of adequate housing, lack of potable water, unavailable funds for school, unemployment and thus lack of money for food are all concerns as well in the struggle to survive in this part of the world. 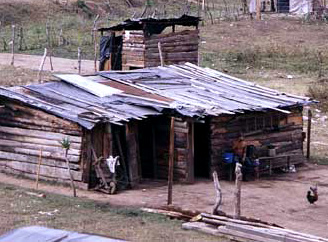 However, these stoves contribute a small but vital part to such communities. People cut down fewer of the live trees in an area already facing deforestation, and they have better health as a result of the Lorena stove projects. This contribution to Nicaraguan lives is a part of the hope that people find in hard circumstances and difficult times. The gratitude and participation of the people of Jalapa in this project shows how powerful it is in making a difference in their lives.