The Project
It is an activity of planting trees in the desert which has operated two years. In the one year since the spring of 1997, 108 citizen/volunteers went to En Ge Bei Desert, Inner Mongolia. They planted 1,888 trees.

In 1998, spring many volunteers asked to plant trees in the desert, they hoped that they would have the collective power to stop the advancement of the En Ge Bei by planting trees. 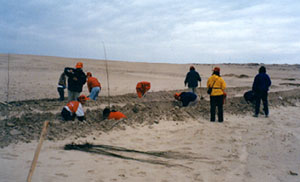 The People
Most volunteers were members of organizations in Beijing, others were pupils from Beijing the Eigth Middle School. 11 pupils were from Da Yu School, Jiang Su Province. Many volunteers are Beijing citizens, newspersons, teachers, etc. They were voluntarily to join this planting tree in desert activity. People used holidays and weekends and volunteered their time to plant trees in the desert. Their train ticket was at their own expense. On weekends of the plantings, volunteers left Beijing for Chi Feng on Friday evening at 8:00 and were back on Monday morning at 6:00.

Volunteers hope to continue this activity in 1999 and beyond because it is very important to deal with the desert issue in China. The desert comprises 27.3% of all of the ground in China, and is expanding. If we hope to change desert issue we must continue to plant trees.

There were four separate batches [of volunteers] that went to the Ke Er Qin Desert, Chi Feng [Province], in Inner Mongolia: