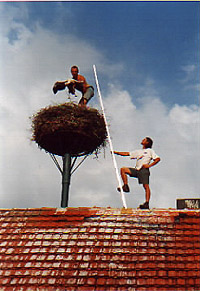 Peaceful and happy New Year! Let us thank you very much on behalf of the Center of Environmental Education CICONIA and many other enthusiastic people that every year spend most of their holidays on White Stork conservation in the Czech Republic and Slovakia. Your support was very important in our fundraising efforts and helped us to convince other donors. Our activities on stork conservation are very successful and well known in the country among birdwatchers, some state officials and professional nature conservationists.

Not only we work on protection of storks but also started new programs on conservation of kingfishers and farm birds such as partridge or quail. [We are sending you our leaflets by postal mail.] During the winter months we participate in national census of migrating and wintering birds on the river Elbe. And of course this is the time of the year when we approach possible sponsors to support our summer activities.

If you have any question related to bird conservation in the Czech Republic or you would be interested in more detailed information on White and/or Black Storks, please do not hesitate to ask! We really thank you very much for your care and open heart. 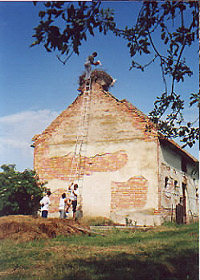 Our group organized monitoring, banding and awareness raising on White Storks. The species is an endangered bird in the whole of Europe. Around 1000 pairs nest in the Czech Republic. The Center of Environmental Education CICONIA is one of the most active groups involved in long term stork conservation in the country, and we closely cooperate with similarly focused ornithologists in Slovakia.

Repair work on several nests was done before the arrival of storks in 2001. In the spring, the behavior of pairs was monitored and in June and July extensive banding of chicks was organized. In July and August monitoring of adults with bands was also conducted. A total of 48 nests in the Czech Republic and 32 in Slovakia were controlled, and 226 chicks were banded in both countries. 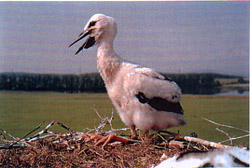 From interesting findings it is worth mentioning, that one adult stork nesting in Horazdovice (South Bohemia) was originally banded as a chick in Germany (Loebnitzch) in 1988, so the bird is now 14 years old!

It has been also recognized that education and awareness raising plays an important role in storks' protection. Therefore we organized 11 presentations for schools, and and published and distributed information leaflets about the sites of storks' nests. We organized a press conference in Strakonice (South Bohemia. Several articles were written about the project in local newspapers and also in national ones.

Thanks to the family of donors from Massachusetts, New Jersey and Pennsylvania we were able to cover part of our extensive travel expenses to nesting sites in 13 districts in the Czech Republic and 8 districts in Slovakia. Printing of our awareness raising materials (leaflet, poster, stickers) was sponsored by the Environmental Partnership Foundation, Ministry for the Environment and Foundation for Development of Civil Society.

We thank you again for your support.