Biosphere to Clean Up Water in Tajikistan

The largest aluminum manufacturing plant in Central Asia - the Tajik Aluminum plant - is located in Tursunzade, in the south-western part of the Republic of Tajikistan. This plant creates a dangerous ecological situation in Tursunzade and nearby territories, especially with its discharge of fluorine compounds. Scientists' studies over many years have shown that drinking water is one of the main sources of fluorine in human organisms.

Studies of this region's water supplies discovered that the content of fluorine in surface waters exceeds allowable concentration (1.5 milligrams/liter) and makes up 1.77+0.2 mg/liter average. However the local population is not aware of the numerous data about harmful effect of aluminum manufacturing on the environment and on fluorine toxicity. The aim of the project was to improve health in the unfavored area of Tursunzade region, where live 3,000 inhabitants (many of them are children less than 16 years old). The main focus was to provide environmentally clean water, by introducing a plant for defluorinization of drinking water. Related to this, the local population's participation in the ecological movement was increased by widely spreading information on ecology and establishing new branches of ecological NGOs.

During our study of water-supplies in the zones of research, we established that the content of fluorides exceeds PDK in surface waters and underground waters (PDK = 1.5 milligram/liter). The content of fluorine in the surface waters of Jamoat Karatag and Telman State Farm made up is 1.72±0.3 milligrams per liter and 2.00±03 milligrams per liter, respectively. Analysis of samples of water from three different sources of water supplies situated in the territories of the Aluminum plant has shown the following concentrations of toxic substances:

Inhabitants of southern regions consume between three and four liters of water daily during the summer months. If a teenager (13-17 years old) drinks 3 liters of water containing 3.5 mg of fluorine, then in twenty four hours he gets 1 mg of fluorine. An adult drinking four to five liters of water daily gets 1.4 -1.75 mg of fluorine. As was mentioned above, the population of Republic gets 1.5 mg of fluorine daily through foodstuffs, the biological effects of which equal 1.2 mg fluorine of drinking water. Consequently, the daily consumption of fluorine for teenagers makes up 2.2 mg, and for adults 2.6-3.0 mg, or 0.049 mg/kg of weight of body (accordingly). Although they intake a maximum quantity of content of fluorine in foodstuffs, nevertheless the daily intake of fluorine by each inhabitant of Jamoat Karatag in Tursunzade region makes up approximately 2.8 mg. Among schoolchildren of 6-10 years of the region is observed that 55 of 150 have dental caries (37%). Among schoolchildren of 15-17 years, 53 of 105 observed have dental caries (54%).

Thus, our data on environmental conditions in Tursunzade region show a definite increase in content of fluorine compounds in our environment (atmosphere air, soil, water), that can accumulate in human organisms and finally affect disease levels in the population. 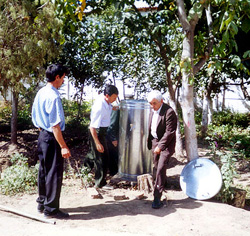 From 28 of August to 30 of August 2001 in Jamoat Karatag in Tursunzade region, the members of "Biosphere Association" held a seminar, round table and working meetings. 18 activists from the regional ecological movement participated, along with official representatives of local governmental bodies and health services. Officials present included: The theme of the seminar was: Fluorine and Environment.
The Agenda included:
Measures on improving of quality of drinking water in Tursunzade region, and
Establishing the Committee of Ecological Movement in Jamoat Karatag of Tursunzade region.

Participants of Chernobyl - Safarov Kh., Begmirzoev B., Ruziev S., and Karimoz I. took part in the discussion, as well as Yuldashev U.-the Representative of Hukumat of town.

First, the information on the Tursunzade region's environment was presented and discussed. The second matter discussed was recommendations on improving the quality of drinking water in the territory of Aluminum Plant. The brochures "Fluorine and Environment" which Biosphere Association had offered were approved. The representatives of local Hukumat expressed their views that the "Chashma" equipment for defluorisation and clarifying of drinking water should be installed. The Representatives of the Hukumat of town and activists of ecological movement of Jamoat Karatag of Tursunzade region asked the chairman of "Biosphere Association" to help in observation and treatment of children and in installing plant "Chashma" in other schools, kindergardens and the health clinic of Jamoat Karatag.

They have worked out the "Chashma" system for defluorinizing and cleaning drinking water. The plant is intended for cleaning drinking water from fluorine-ions directly on the using place. This process also removes the smell from the water. The principle of work of plant "Chashma" is based on absorbing fluorine-ions from the composition of water to be cleaned by layer of sorbent (look passport of plant). The plant had passed successful tests at the biochemical laboratory of Scientific Research Institute of Gastroenterology of Academy of Sciences of Republic of Tajikistan. The content of fluorine in water before cleaning made up 2.2-2.5 mg/l and after cleaning water in plant "Chashma" the content of fluorine was less than 0.5-0.9 mg/l. 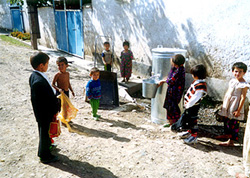 They have installed two plants "Chashma" at school N 89 in Jamoat Karatag for use of schoolchildren and inhabitants of Jamoat. The volume of water to be cleaned in the plant makes up 80 liters in hour, that can provide 3000 people (1400 of them are children to 16 years) with environmentally clean water.

For informing the general public on this problem, information was published in the October 2001 editions of these Republic newspapers: Jumhuriat, and Kurer - October 2001 year. Region officials have been speaking every month on the radio program "Nasimi Aiom" on problems of cleaning drinking water. Information on "Biosphere Association"s activities was repeatedly covered by TIA "Khovar" (News agency).