2003 GreenSOS Fund is one of the practical actions developed after the GreenSOS Chengdu Strategic Planning Workshop in August 2002. Later, after our first round of small grants, we discussed the kinds of adjustments and additions we would like to see. These in turn have been embodied in the selecting, evaluating, and monitoring procedure of the Greensos Small-grant Support Projects selection in this year. 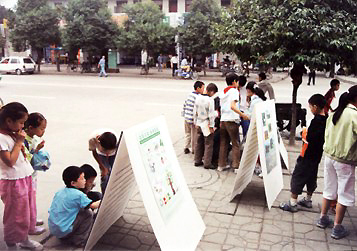 At the end of 2002, we selected 12 candidate committeemen to help the committeemen to finish their work. We called all of these candidates the “Project Representatives of GreenSOS (PRG)”. In that case, these representatives might form into several small groups, and the members of these groups could be able to work cooperatively. During the project evaluating, and monitoring procedure, the representatives have shown their great functions. Most of the programs, which got the approval of the Greensos Small-grant, have been able to carry out their projects smoothly.

Our Project Representatives were divided into different regional groups. We used a multi-grading system to select 10 projects being available of the GreenSOS full-sum fund support (That’s the amount which each project has applied in total.), and the sum of the fund for every project is about 2000 RMB; and 2 of the projects got the Greensos half-sum fund support (That’s half of the money that the project required.), and the fund for each project is about 1000 RMB. In June, we passed an approval of an emergency project fund support that was 1000 RMB. (Details in appendix). 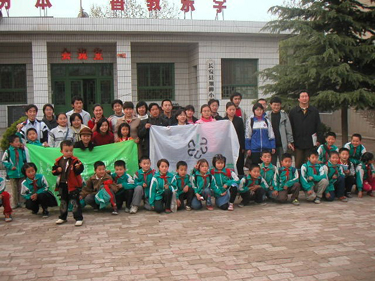 Some of the projects (the Sichuan Pollution, Law, Education Program; and the Environmental Dormitory Program) had to delay their plans until September because of SARS. Some other projects changed their schemes a little bit from the permission of the Project Representatives. These were: the Qinghai Plain Tribe—The Support From College Students to Qingzang Altiplano Ecology Protection Action; and Guizou Province students who established a website of the Guizou College Environmental Protection Organization League and the public’s Environmental Consciousness Investigation). The rest of the projects have been completed successfully. Among them, the Green Newsletter, a project belonging to “Promise Nature”, the environmental protection association in the Southwest Science and Technology University in Sichuan province, has come out its first issue. The newsletter has a good reaction from the students, and many of them have expressed their willingness to help the Tibetan Antelope. The Second Green Camp organized by the Anhui Wanxi College also got the financial support from many sorts of organizations, and that included GreenSOS. So their activity was finished successfully according to the Matching Fund suggestion from us.

Meanwhile, we received the activity proposal from the Summer College Green Camp of the Science and Technology University of China in June. Because of some kind of impersonal reason, they had lost their initially promised financial support. They turned to us for help when their project was facing the plight of cancellation. The PRGs had an emergency meeting then to discuss the problem, and at last decided to give them a 1000 RMB support. In that emergency meeting, an elementary scheme of how to created an Emergency Fund has been drawn up. We will begin this Emergency Fund at the end of this year, at the same time when the new term of the Greensos Small-grand Support program starts.

The GreenSOS Fund work in this semester has begun with the PRG (Project Representatives of GreenSOS) on-line meeting, on September 14.

The latter-half year working plans for 2003:

November to the end of December

To the middle of next January 2004

We thank the Virtual Foundation and all the donors who supported this year's round of GreenSOS student projects, and the continued growth of our grant program.