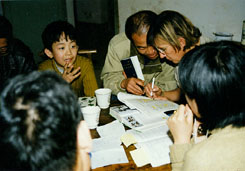 Bird watching, which links education and conservation, is a new thing in China. It is being done increasingly in Beijing. Green Earth Volunteers were the first to watch the birds in 1996. The Green Earth Volunteers feel that there activities have been successful and plan to continue to arrange bird-related activities. They hope to have more people join bird watching to improve consciousness of the importance of protecting birds.

In the past year, The Green Earth Volunteers arranged a series of birdwatching and educational activities including:

Bird Watching In the Field

On October 26, 1997 about 50 persons went to Jiu Feng from Beijing.
It is a raining day and people are worried that they will not see the birds. When the participants arrived to Jiu Feng, Prof. Zhao taught them how to look for the birds, and the raining stopped. After raining, they saw some birds one usually couldn't see. 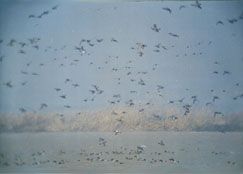 On November 22, 1997 about 50 persons went to Mi Yun near Beijing.
The Green Earth Volunteers were looking many birds, they are named Wild Goose Swan, Duck, and Hagdon.

On December 13, 1997 about 50 persons went to Yu Yuan Tan from Beijing.
Prof. Zhao Xinru lectured for Green Earth Volunteers. This and other photos are in the gallery.

On February 9-14, 1998 about 15 persons went to East Dong Ting Lake Hunan Province.
There are photos and a newspaper account of this event (see below). 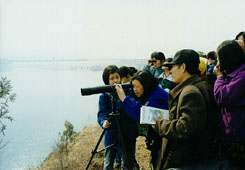 On March 8, 1998 about 100 persons went to Jin Hai Hu near Beijing. This is a photo in which I was watching birds using the new telescope which is from Virtual Foundation.

Brief:
This birdwatching team, from different organzations in Beijing, calls themselves Green Earth Volunters. By profession, they are professors, government staff, teachers, two pupils, and a fancier of birds who is a Frenchman. The group has taken several outings. The outing to Dong Ting was two days: the first day participants were looking at birds from a boat, the second day they were looking from the banks of the lake...